I told you I'd blog eventually!

Thanks for checking out the blog. If you're reading this, you've (hopefully) been listening to the podcast. And if that's the case, thank you. Thank you, thank you, thank you. I know I say it about fifty times per episode, but I can't explain just how much I appreciate the support everyone has been showing Remember The Game? since we launched it last July. Our numbers have increased every month, and we're at almost a thousand downloads every thirty days. Those may not be big numbers to anyone making a living in the podcast world, but it's more than I ever could've imagined we'd see. So really, to all of you that have listened, downloaded, shared, appeared on the show, and supported me over the last thirty-two episodes... 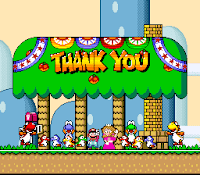 I'm going to attempt to post a blog per week on here. Admittedly, it probably won't happen, but I'm going to give it a shot. I came up with the idea for the blog after doing a little homework and looking into ways to grow your podcast audience. One of the common themes in every article was to launch a website/blog to run alongside your podcast. I honestly don't know how many people read blogs in 2019, but I figure it can't hurt. It's also another excuse for me to talk about retro gaming, which is amongst my favourite things on the planet.

I figured for blog number 1, I'd explain why that is.

I was born in 1983, and the NES launched in North America in 1985. I don't specifically remember when we got ours, but I also can't remember a time before it. I've been gaming my entire life. From playing the Super Mario Bros games with my little brother (we used to call fire power "spit"), to being obsessed with Earthbound, to spending way too many hours wrestling with my buddies on the Nintendo 64, I've loved video games forever. My favourite Christmas presents every year were new video games. We knew exactly how big the box for a game was, and we'd dig them out and put them on a pedestal on Christmas morning. Video games are as much a part of my life as breathing, eating, and sleeping. Some would call me an addict. I prefer the term "enthusiast".

We were a Nintendo household through and through. NES -> SNES -> Nintendo 64. We had Gameboys (separate ones of course. Sharing wasn't an option), so we could play video games on the road. I loved it. We all did, right? If you grew up in the 90's, you played video games. It wasn't as mainstream to be a nerd as it today, but we all were. Trading games with your friends or renting a game on the weekend and playing something new was the most exciting thing ever. Who didn't play a crappy game over and over and over as a kid, because it was the only game you had?? (Bart vs The Space Mutants, I'm looking at you). Just the best times. And when you weren't playing the games, you could watch their cartoon counterparts. Remember The Super Mario Bros Super Show?!

The NES was my gateway drug, but the Super Nintendo was my cocaine. To this day, the SNES is hands down my favourite console of all-time. The 16-bit graphical style is still the best in gaming history, in my opinion. And the games? C'mon.....

I don't know why retro gaming pulls at my nostalgia heart strings like it does. I grew up watching cartoons, and listening to certain music, but those things just doesn't trigger the same emotions gaming does for me. I've never escaped Nintendo's grasp. When the Wii launched their Virtual Console, and games from my childhood started becoming readily available again, I lost my mind. I probably spent more money on the VC than I did on actual Wii games. It re-ignited the passion I had for those old titles.

When Nintendo released their NES and SNES classics (and I was finally able to get my hands on them), I was in heaven. Admittedly, I hacked both of them, and filled them with games from my childhood. I travel for work a lot now, and I take them on the road with me so I can get my fix while I'm killing time in hotel rooms. I constantly go back and replay games I've played through countless times before, instead of focusing on more of the new titles coming out these days. There's something about the simple graphics, the music, the ridiculous difficulty....it helps me relax. Maybe that's why they have such a hold on me. Retro games take me back to being a kid, before I had bills, responsibilities and grey hair. They're like a portal into an alternate universe, where my only concern is getting through this level without dying and losing my spread gun. (Bonus points if you know what I'm talking about).

I love retro gaming. If I could make a living just playing and talking about old video games, I would in a heart beat. And maybe someday that'll be option. But until then, they're just my go to hobby. Playing them is the best, but talking about them on a weekly podcast is almost as fun. It's another way for me, my guest, and my listeners to get our nostalgia fix. Knowing that so many of you enjoy talking about those games as much as I do feels really good. I'm glad you're all enjoying these trips down memory lane as much as I am. We're just getting started.

Consider Supporting us on Patreon!