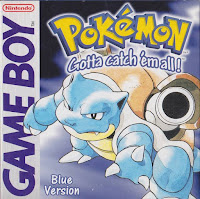 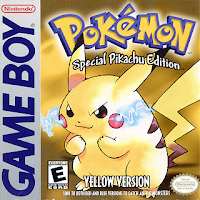 This was the first episode of the podcast where I got a little nervous about the blowback we might get from the gaming community. When I launched this podcast, I envisioned a very relaxed, unstructured conversation between me and my guest. I just wanted it to resemble a chat between two kids on the playground, passionately going over about what they like and don't like about a video game. We don't do a lot of homework, and we don't claim to know everything about a particular game.

My concerns regarding this episode were justified, haha.

I like Pokemon. Quite a bit, actually. But I know that I can't come close to matching Poke-knowledge with the diehards out there. That was made abundantly clear to me after this week's episode went live.  So if you're a passionate Pokemon Master, show us some love and cut us some slack!

I had Pokemon Blue growing up, and my little brother had Red. We also had a great player's guide explaining which Pokemon we each couldn't catch without the others help, and we wore that guide out. We played through these games so many times. I know that there have been a ton of these games released since the originals, but there hasn't been another generation that sunk it's teeth into me the way these games did in Junior High. Pokemon was a full fledged phenomenon, and 20 years later, it's still one of the biggest and most successful franchises in gaming.

My buddy Mark came over, and we had a great time remembering a world before bills, jobs, and responsibilities. When your only cause of stress in life was trying to wear that Zapdos down without killing it (let's call a spade a spade, they aren't "fainting"). We talked Pokemon Red, Blue, and Yellow. And we tried our best. Show us some love.

And God dammit, show Bulbasaur some love, too. After all, it's the definitive starter.

Search for 'Remember The Game' on your favourite podcast provider, on Youtube, or just check it out right here:

Consider Supporting us on Patreon!